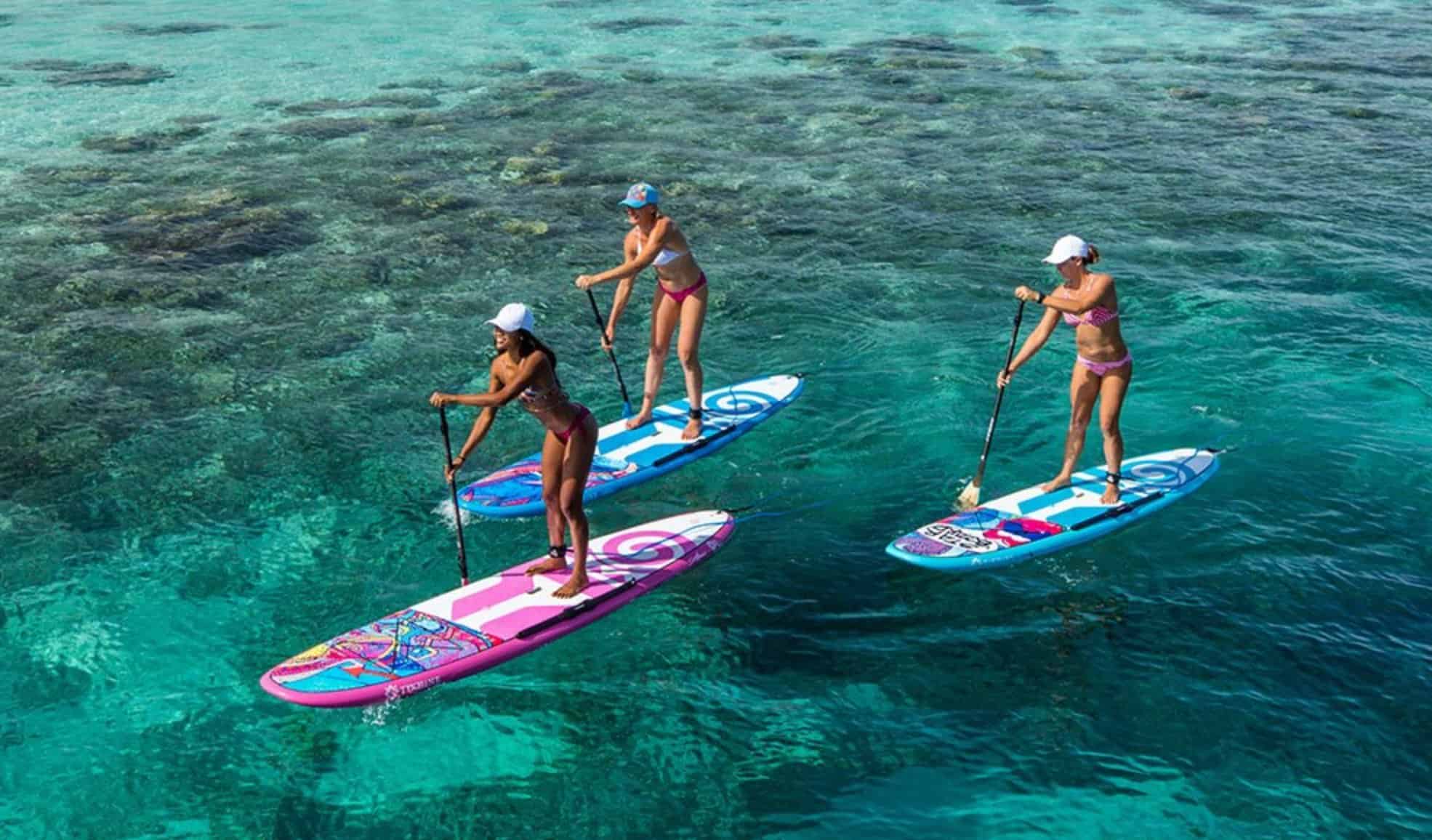 Starboard is not your average stand up paddle board manufacturer. They are one of those rare companies that manages to combine innovation with eco-friendliness in a way that pushes the industry forward without harming the planet.

In expert paddle boarding circles, Starboard is known for its novel, out-of-the-box approach to board design and manufacturing. Somehow they manage to keep surprising us every year with both brand new products and clever tweaks to older models.

As avid SUP fans, we’ve been following them for a few years now. We’ve come to rely on their ingenuity in the aesthetic design of their boards as well as in the boards’ technological prowess. We can’t help but feel a tinge of excitement every time Starboard announces their releasing a new product.

Starboard SUP makes some great rigid paddleboards, but where they really shine is with their Starboard inflatable paddle board models. Some of our favorite inflatable models are made by Starboard, including the Atlas, the Whopper, and the incredibly popular Blend.

Their inflatable SUP lineup includes tens of different models for various specialties and skill levels. They offer inflatable stand up paddle boards for children, teens, and adults, across a wide range of weight classes. They have boards specifically designed for surfing waves, windsurfing, racing, fitness paddling, and even just sightseeing. They make flat water boards, river boards, and models designed for ocean paddling. They even have a great multi-person model that you can use for a romantic paddling getaway with your significant other.

Starboard’s iSUP lineup is currently ranked as one of the most diverse inflatable lineups in the paddle boarding industry. 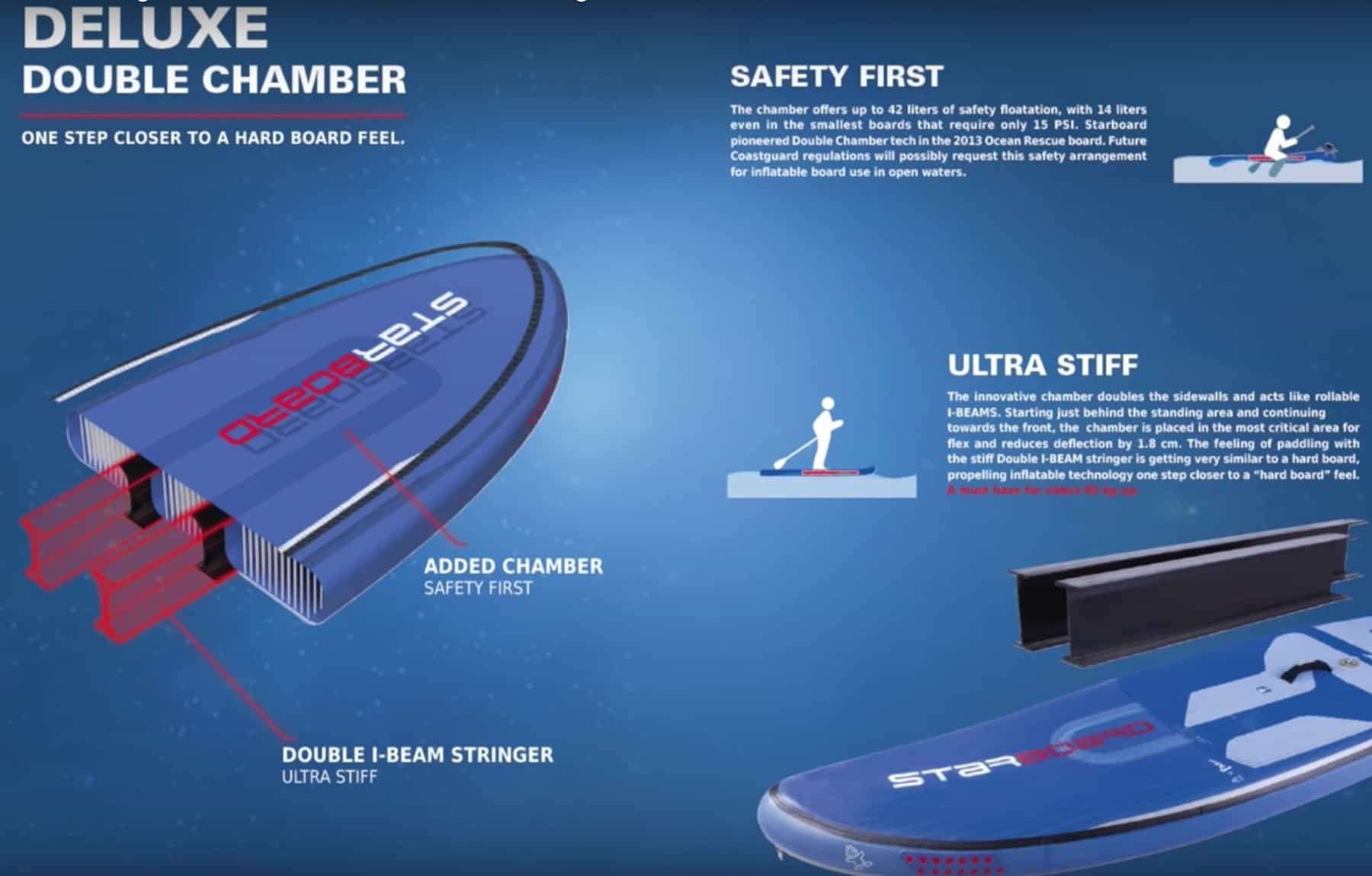 Starboard is responsible for some of the best design ideas in the inflatable paddleboard market. They are the inventors of double chamber technology, which brings an extra dimension of safety to amateur paddleboarders around the world.

The double chamber, which is featured in all Starboard Deluxe models, provides a second air chamber inside the body of an inflatable paddle board. The second chamber is surrounded by double side walls, which help to prevent penetration and deflation. This has the added benefit of stiffening the board considerably, bringing it just a step closer to that solid “hard board” feel.

The doubled interior sidewalls basically have the same effect as adding I-beam support to the paddle board. This increases the safety and maneuverability of your inflatable board without losing any of its superior flotation.

The extra air chamber contains between 14 and 42 liters of backup flotation. This can make a huge difference to your ability to make it back to the shore in the event of a boarding accident. Double chamber technology makes Starboard’s inflatable boards some of the world’s safest. 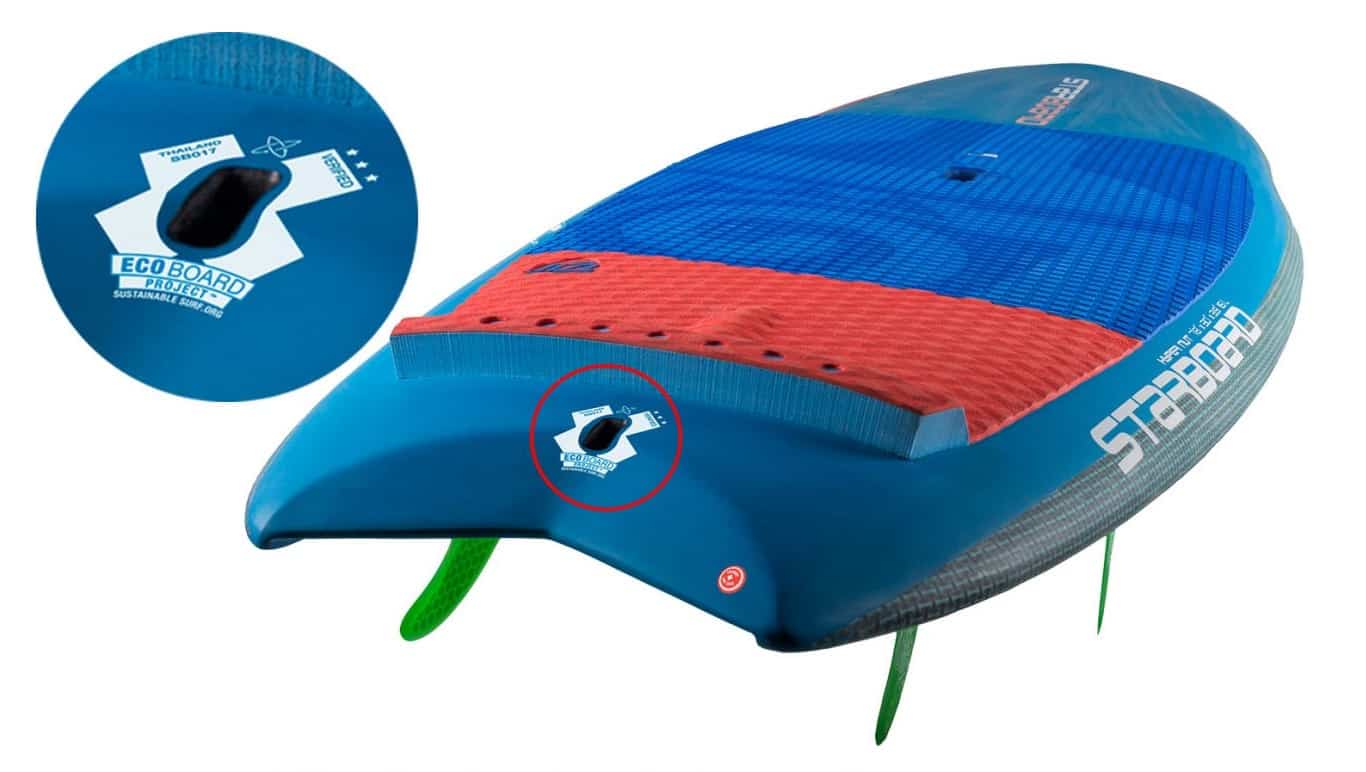 The environment is important to us. We try to recommend companies that not only create great paddleboarding products but also help take care of the oceans and rivers we love to paddle on.

Starboard is involved in and passionate about various non-profit, eco-conscious projects. Some of these help to minimize their effect on the environment while others attempt to leave it even better than they found it.

Svein Rasmussen, the founder of Starboard SUP, is vocal about his support for environmental cleanup and restoration. Many of his interviews with the press emphasize his passion for leaving the planet a better place for his children. He defines success for Starboard as being able to make people happy and help the planet restore itself.

Starboard’s current environmental projects are focused on reforestation and the reduction of plastic pollution.

Here are our reviews of the most recent additions to Starboard’s inflatable product lineup. The boards come with three different distinctions: Model, Size, and Zen/Deluxe.

The name of the model tells you the basic shape of the board. This specifies the kind of paddle boarding it was designed for, as well as what kind of water it can handle best.

Some models come with different sizes and weight capacities. As a general rule of thumb, larger boards are more stable and can handle larger people.

Most models and sizes come in both a Zen and a Deluxe version.

The Zen version, formerly known as the Fun version, is the entry-level version. It has a drop stitch that is between four and five inches thick, which makes it lighter and slightly smaller than the Deluxe version. Zen boards offer a good balance between durability, speed of inflation, user-friendliness, and rigidity.

The Deluxe version is usually about an inch longer than the Zen version and a couple of pounds heavier. It features a six-inch thick drop stitch, which makes the board slightly stiffer. Stiffer boards glide through the water more easily and are better suited to bigger users. Depending on the model, Deluxe boards also come with extra features like carbon rails, dual stringers, and removable side fins. 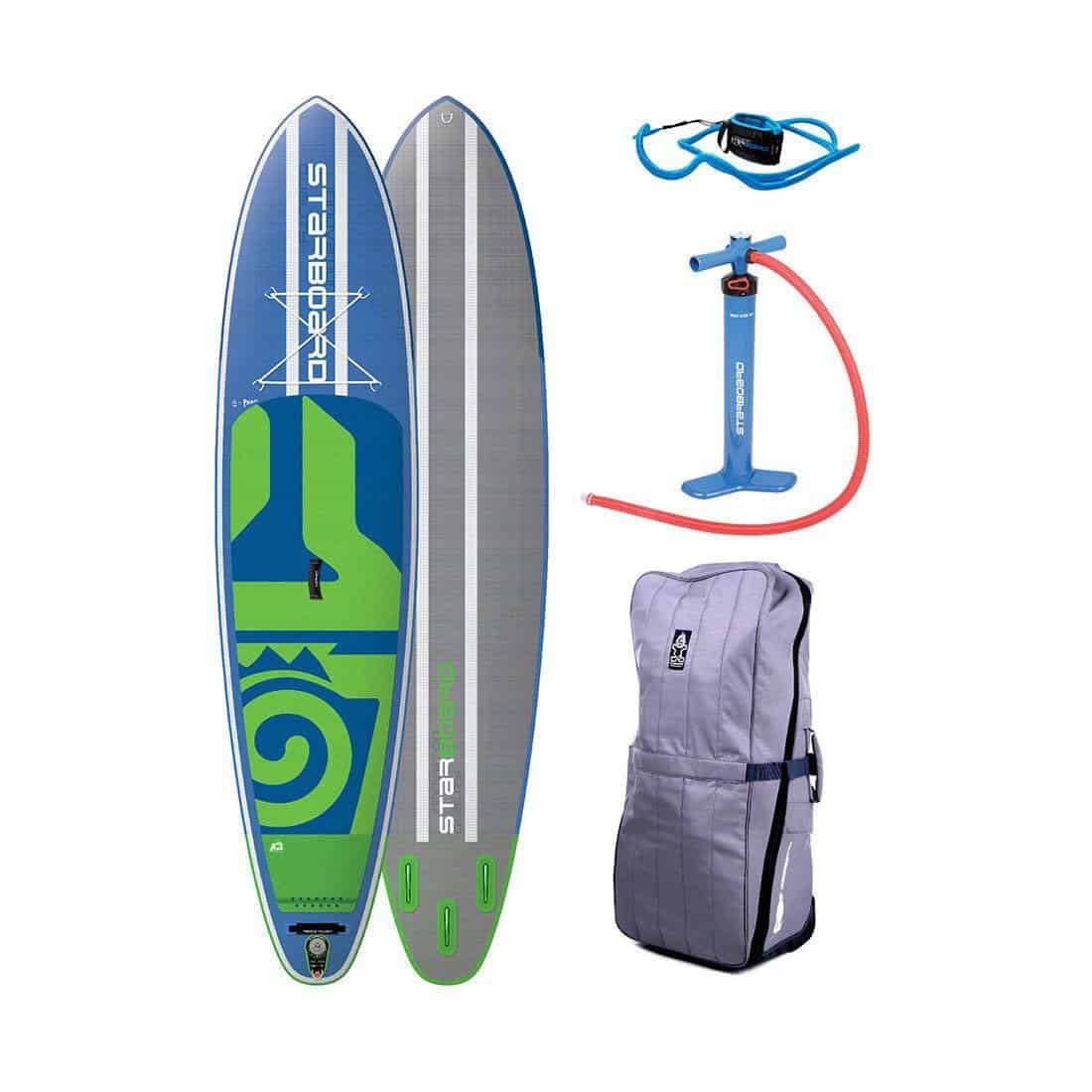 The Atlas is Starboard’s basic go-to model. It is an all-purpose paddle board designed to perform in all kinds of water conditions.

This board is 33 inches long, 12 inches wide, and six inches thick. The Atlas Zen version weighs 25.5 pounds, and the Deluxe version weighs 28 pounds. The weight capacity for both is at 265 pounds.

The Starboard Atlas is made for maximum stability. It is a cruising board that you can take with you both to your neighborhood lake and to your ocean vacation. The sturdy design allows you to take your mind off your balance so you can enjoy the natural sights and sounds that surround you. 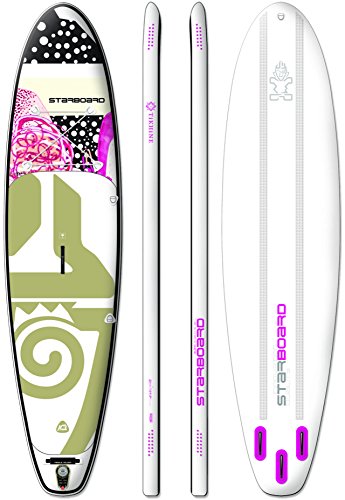 The Blend is a speedy model with a thin nose designed for cutting through the water. It also has a wide tail to make sure the ergonomic design doesn’t sacrifice stability.

One of Starboards most popular designs, the Blend is made for gliding fast. It is a versatile model with rave reviews from both surfing paddle boarders and flat water cruisers.

This board is 32 inches long, 11.2 inches wide, and five and a half inches thick. The Blend Zen version weighs 23 pounds. The Blend Deluxe version is three pounds heavier. Its maximum weight capacity is 220 pounds. 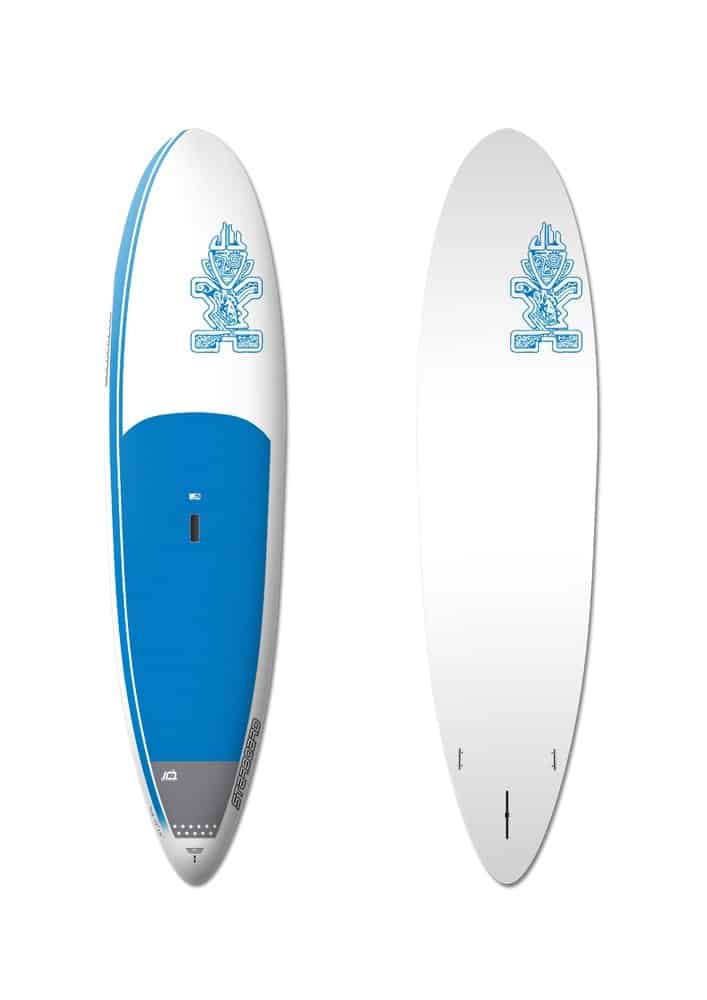 The Drive is one step shorter and narrower than the Blend. It measures 30 inches long, 10 and a half inches wide, and about five to six inches thick, depending on whether you buy the Zen or Deluxe version.

Made for smaller people, this board doesn’t take a lot of upper body strength to paddle. It is also quite easy to handle. The size difference, however, does make it a bit less stable than the larger models.

The Drive Zen version weighs only 20 pounds, and the Drive Deluxe weighs 23.5 pounds. The Drive’s maximum weight capacity is limited to 198 pounds. 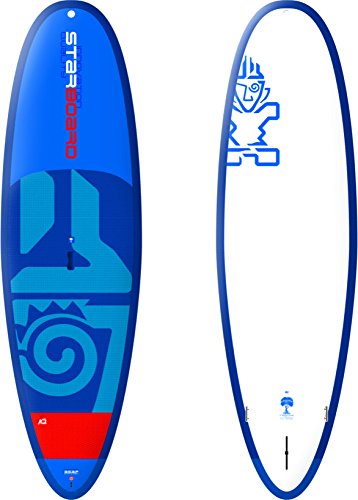 The Whopper Zen has a unique design that is both shorter and wider than the above models. This makes it both more stable and easier to maneuver. The Starboard Whopper Zen is great for fishing as well as general SUP fitness.

This board is 34 inches wide, 10 feet long, and about six inches thick. The Zen weighs 22 pounds, and the starboard Whopper Deluxe weighs 25 pounds. It can hold users weighing up to 265 pounds. 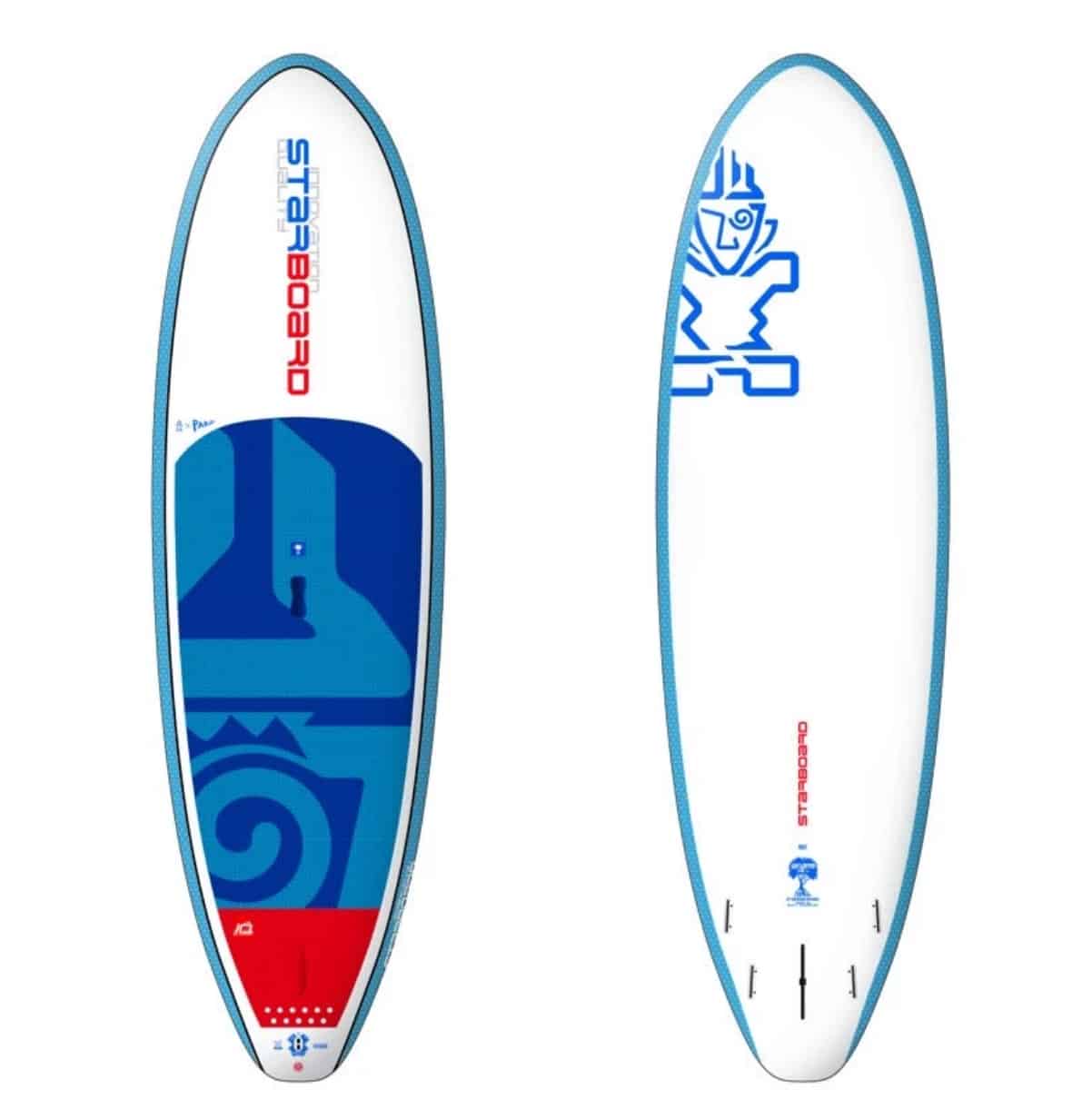 The Converse is Starboard’s shortest board, making it easy to handle and convenient to transport and store. This is a fun model that measures 30 inches long and nine inches wide. It only comes in the Zen version and can carry up to 187 pounds. 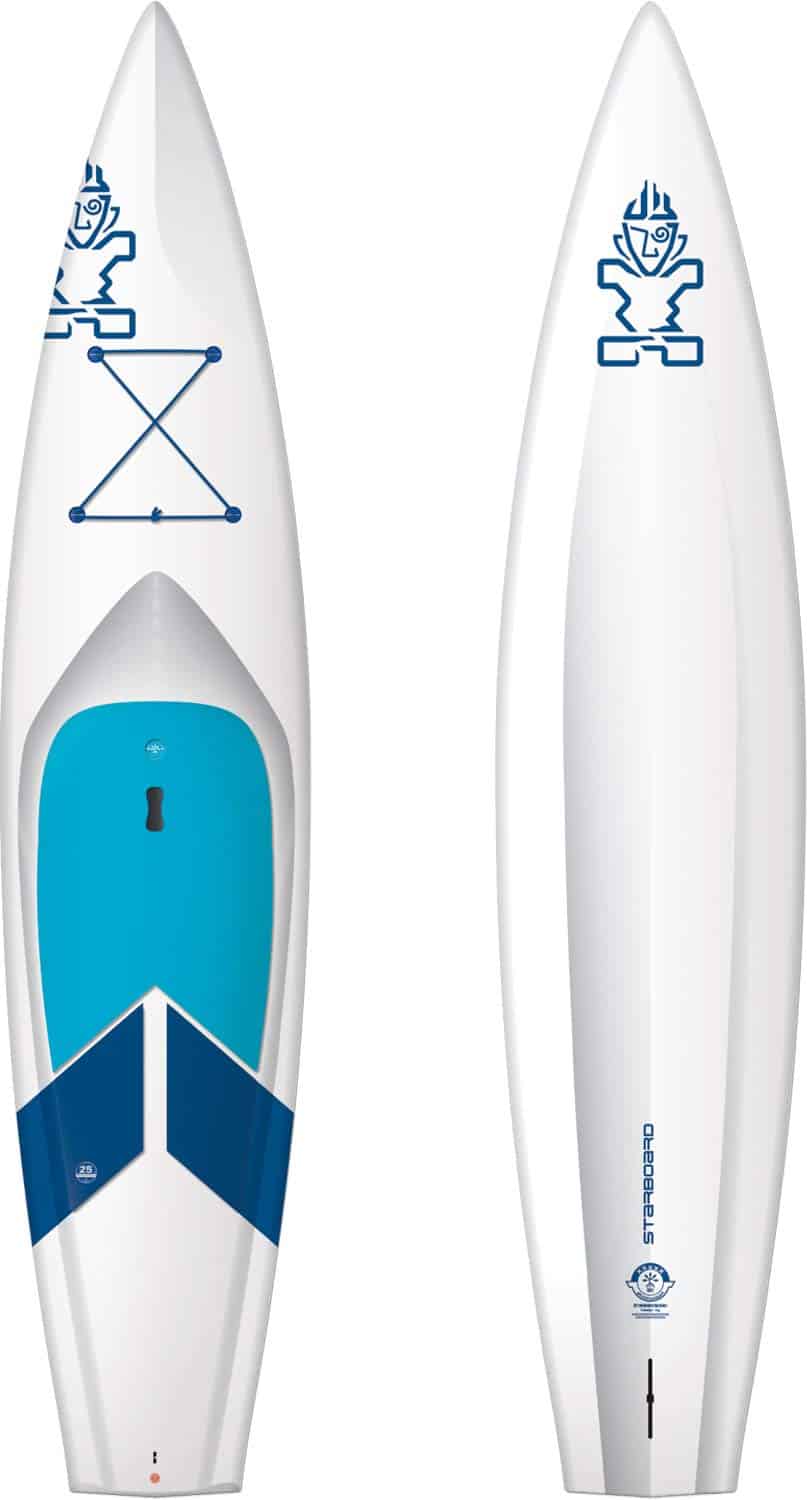 The Touring Zen board is a sightseeing model with a pointy nose. It is made to cut quickly through flat water. The board has a solid build with a high degree of stability. This one comes in three different sizes, with lengths of 11.6, 12.6, and 14 feet. It is about 31 inches wide and six inches thick.

The 14-inch version is the most stable of the three. It features an extra storage compartment in the nose of the board and a maximum weight capacity of 265 pounds.

The 12.6-inch version is a bit easier to maneuver but can only carry up to 243 pounds.

The 11.6-inch version is built for smaller people. It is a bit faster and more maneuverable. It is also one inch shorter than the other versions and carries only 220 pounds.

All three Touring board sizes come in both Zen and Deluxe versions.